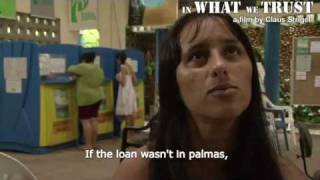 in WHAT we TRUST - Joaquin de Melo about Banco Palmas, Fortaleza