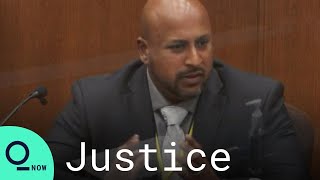 Bloomberg Quicktake: Now
A portion of a video from a Minneapolis police officer's body camera where George Floyd can be heard pleading with the officers has come into question with his exact comments possibly regarding drugs coming under scrutiny.

Derek Chauvin's attorney Eric Nelson played some of the video in court Wednesday for James Reyerson, a Senior Special Agent with the Minnesota Bureau of Criminal Apprehension. Nelson asked him beforehand if he heard Floyd say: "I ate too many drugs," and Reyerson said he did not.

But after Nelson played it for Reyerson in court, Reyerson agreed it sounded like Floyd said: "I ate too many drugs."

Prosecutor Matthew Frank then played a longer version of the video and asked Reyerson if he could tell what Floyd was saying and Reyerson said he thought it sounded like Floyd said, "I ain't do no drugs."

"So, that's a little different than what you were asked about when you only saw a portion of the video, correct?", Frank asked.

Earlier in the day, Nelson had asked Sgt. Jody Stiger of the Los Angeles Police Department, about the same video clip but Stiger said he couldn't make out what Floyd was saying.

Chauvin, 45, is charged with murder and manslaughter in Floyd's May 25 death. The white officer is accused of pinning his knee on the 46-year-old man's neck for 9 minutes, 29 seconds, as Floyd laid face-down in handcuffs outside a corner market, where had been accused of trying to pass a counterfeit $20 bill for a pack of cigarettes.

The defense argues that Chauvin did what he was trained to do and that Floyd's use of illegal drugs and his underlying health conditions caused his death.