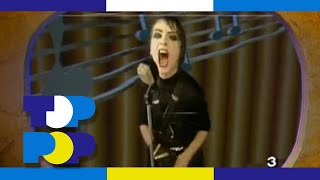 TopPop
Les Rita Mitsouko was a French pop rock group formed by Fred Chichin and Catherine Ringer. The duo first performed as Rita Mitsouko at Gibus Club in Paris in 1980. They went on to become one of the most acclaimed musical acts in France. "Marcia Baila", their debut single produced by Conny Plank, went to number 2 in the French singles chart in 1984.

This video was first broadcast on 31 March 1987

AVROTROS is a Dutch radio and television broadcaster, founded in 2014 from a merger of AVRO and TROS. From January 1st, 2014 the name of the merged broadcaster was used in joint programmes. AVRO was founded in 1923 as the Netherlands first public broadcaster. TROS started broadcasting in 1964. Toppop was a weekly AVRO pop program that was aired between 1970 and 1988.