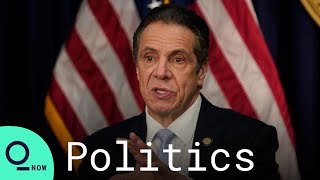 Bloomberg Quicktake: Now
New York Governor Andrew Cuomo said he expects the tax increases in his state budget deal to be offset by a repeal of the federal cap on state and local tax deductions.

Cuomo said he has spoken to New York’s congressional representatives and President Joseph Biden, and “fully” expects a SALT repeal. When that happens, net taxes will be 37% lower, the third-term governor said Wednesday during a press briefing.

“When you talk about this tax package you cannot talk about it without anticipating a SALT repeal,” he said. “When SALT is repealed, the taxes will be going down.”

It remains unclear if the SALT cap will be repealed. The $10,000 cap is a prime focus for Democrats in Congress, who have said they won’t support Biden’s tax increases to fund his infrastructure proposal unless the plan includes a repeal of the cap. Representatives from high-cost states, including New York and New Jersey, have said the restrictions on the tax break -- enacted by former Republican President Donald Trump -- have caused their residents to pay more in taxes.