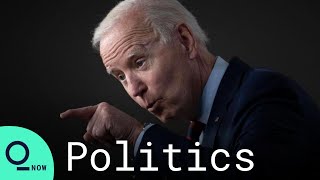 Biden Pitches $2.2 Trillion Infrastructure Plan as Vital to Keep Up With China