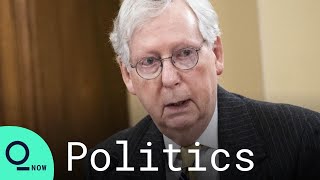 Bloomberg Quicktake: Now
Mitch McConnell is telling U.S. chief executives to stay out of politics in response to the corporate backlash against a new GOP Georgia voting law -- a shift for the Senate Republican leader who has long encouraged corporate political activity in the form of donations.

McConnell joined other Republicans this week in criticizing corporations, including two Georgia-based companies, Delta Air Lines Inc. and the Coca-Cola Co., for objecting to the state’s new election law that Democrats say restricts voting. He and Republicans also have criticized Major League Baseball for moving its All-Star Game from Georgia to Colorado in response to the law’s passage.

“My advice to the corporate CEOs of America is to stay out of politics,” McConnell said at a news conference on Monday. “Don’t pick sides in these big fights.”

But he added, “I’m not talking about political contributions.”

Speaking at another press conference in Kentucky Tuesday, McConnell said it was “quite stupid” for corporations to “jump in the middle of a highly controversial issue.”

But he made a distinction between public statements and political giving. He said he objects to companies “taking a position on a highly incendiary issue like that and punishing a community or a state because you don’t like a particular law they passed.”

However, backing candidates with contributions means supporting their positions on issues, and McConnell has long championed the right of corporations to make unlimited donations to candidates. In 2002, he was the lead plaintiff in McConnell v. FEC, a lawsuit challenging provisions of a campaign finance law known as McCain-Feingold, including its ban of so-called soft money.

Before that law was enacted, political committees like the Republican National Committee and the Democratic Senatorial Campaign Committee could take donations in unlimited amounts from corporations.

While parties couldn’t use the money to tell voters to elect or defeat a specific candidate, they were allowed to spend it on issue advertisements critical of an candidate’s record or policies and other activities. Between 1991 and 2002, the parties raised more than $1 billion in soft money from organizations, including corporations, according to the Center for Responsive Politics. The Supreme Court upheld the ban in 2003.