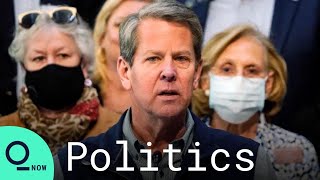 At a Saturday afternoon news conference, Kemp said the League's decision was an example of "cancel culture" in the face of Democrats' criticism of Georgia's new law.

Liberal activists have stepped up calls for corporate America to denounce Republican efforts to tighten state voting laws, and businesses accustomed to cozy political relationships now find themselves in the middle of a growing partisan fight over voting rights.

Civil rights groups have sued to block the new Georgia law, which was passed after Democrats flipped the once-reliably Republican state in an election that Donald Trump falsely claimed was rife with fraud.

Some activists have called for consumer boycotts of Delta, Coca-Cola and others.

They dismiss business leaders’ assertions that they helped water down the bill to ease earlier, more restrictive proposals.

They argue that those leaders should have tried to block the plan altogether.