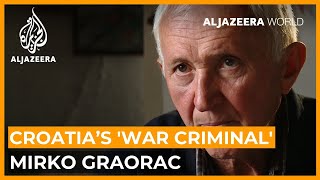 Al Jazeera English
Following the Yugoslav Wars of the 1990s, international courts sought to bring justice to the victims of war crimes.

While many cases were taken on by the International Tribunal at The Hague, other local authorities and courts also convicted people, often along partisan and ethnic lines.

This may be what happened to Mirko Graorac, a Serbian traffic policeman who lived much of his life in the Croatian coastal city of Split. After he retired, he spent most of the war in the early 1990s in the Bosnian village of Bajinci, looking after his parents, but returned to Split in March 1994.

In 1995, he was arrested by the Croatian authorities and accused of being a guard at the Manjaca concentration camp in northern Bosnia and Herzegovina. He was tortured and subject to humiliating treatment by the Croatian intelligence service.

In 1996, he was put on trial for war crimes and sentenced to 20 years in prison, later reduced to 15. He served nine years but always insisted on his innocence.

There is strong evidence to suggest that he may have been wrongly convicted. As early as 1998, Amnesty International published a detailed report arguing that his court proceedings amounted to a show trial. But Graorac and his legal team have so far failed to persuade any official body, including the Croatian Supreme Court, to order a retrial.

Twenty-five years on, this documentary looks at the evidence being used to support his case and hears from former inmates of Manjaca concentration camp, as well as Graorac and his lawyers and supporters.