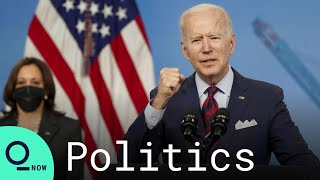 Bloomberg Quicktake: Now
The White House is considering a pledge to cut U.S. greenhouse-gas emissions by 50% or more by the end of the decade, according to people familiar with the deliberations, a target that would nearly double the country’s previous commitment and require dramatic changes in the power, transportation and other sectors.

The emissions-reduction goal, which is still being developed and subject to change, is part of a White House push to encourage worldwide action to keep average global temperature from rising more than 1.5 degrees Celsius (2.7 degrees Fahrenheit) from pre-industrial levels, according to the people. The administration of President Joe Biden is expected to unveil the target before a climate summit later this month.

Targets under discussion for the U.S. pledge include a range of 48% to 50% reduction in greenhouse gas emissions from 2005 levels by 2030, according to one person familiar with the deliberations. Another person said the administration, at the urging of environmentalists, is considering an even steeper 53% reduction. Both asked not to be identified in describing private communications.

The White House declined to comment on the specific numbers, but one official said the administration plans a “whole-of-government” approach to the target, with agencies considering opportunities across the federal government on standard-setting, clean energy investments and resilient infrastructure plans.

By comparison, under former President Barack Obama, the U.S. promised to reduce planet-warming emissions from 26% to 28% below 2005 levels by 2025. Signatories to the 2015 Paris climate accord are scheduled to reconvene in November in Scotland and pledge reductions through 2030.

The administration is fashioning the aggressive target as it seeks to rebuild trust with nations wary after former President Donald Trump withdrew from the Paris agreement and dismantled domestic policies key to driving the country’s promised emissions cuts.

“Countries around the world are looking to see what the U.S. is going to do with this and will it come with something that’s both ambitious and credible,” said David Waskow, director of the World Resources Institute’s International Climate Initiative. “Other countries in the international community in general are looking to see how this can be something that takes flight and will continue past any particular political moment in time.”

Cutting U.S. greenhouse gas emissions in half would require broad action to clamp down on planet-warming pollution from power plants, automobiles, oil wells and agriculture.

The U.S. currently gets about 40% of its electricity from nuclear and renewables, but would have to double its carbon-free power to 80% by 2030 to put the country on track to curb emissions enough to meet that new target, according to Amanda Levin, a policy analyst for Natural Resources Defense Council.

The U.S. would also need to aggressively shift broad swaths of the economy to run on electricity, especially cars, while improving efficiency and reducing energy waste at all levels. Those efforts are key, but will happen more slowly than the transformation of the power sector that’s already well under way.

Environmentalists are lobbying the White House to include an explicit commitment for a 40% reduction in releases of methane, a short-lived but particularly potent greenhouse gas.

Just finding and fixing methane leaks at oil and gas facilities could allow the U.S. to cut emissions equivalent to taking 140 million gasoline-powered cars off the road, said Sarah Smith with the Clean Air Task Force.

The U.S. is on its way to satisfying the Obama-era target, having pared emissions 14% below 2005 levels in 2019, according to government data. The reductions were even sharper in 2020 -- 23.8% lower than 2005 levels -- but only as pandemic-related quarantines spurred a dramatic drop in air and road travel.