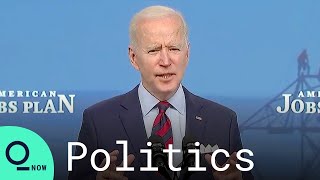 Biden Vows to Work With Republicans on His $2.2 Trillion Infrastructure Plan

Biden has said the pandemic exposed economic inequities that left millions struggling, especially people of color, and that the infrastructure plan needs to go far beyond roads and bridges, as some lawmakers would prefer. He criticized his predecessor Donald Trump’s tax cuts for adding to U.S. debt, called the growth in the fortunes of billionaires during the pandemic unfair and complained about profitable U.S. corporations that manage to pay no federal taxes.

“Where’s the outrage there?” Biden said. “Maybe it’s because I come from a middle-class neighborhood. I’m sick and tired of ordinary people being fleeced.”

Biden said the U.S. needs to fund expanded internet access, replacement of lead water pipes in communities and charging stations for electric vehicles, among other projects.

“China and the rest of the world” are “attempting to own the future -- the technology, quantum computing, investing significant amounts of money dealing with cancer and Alzheimer’s,” he said. “That’s the infrastructure of a nation.”

He added: “Do you think China is waiting around to invest in its digital infrastructure and research and development? I promise you, they are not waiting. But they’re counting on American Democracy to be too slow, too limited, too divided to keep pace.”

Biden said he’s open to negotiating with lawmakers on specifics of the plan. But he said inaction isn’t an option and he isn’t open to increasing taxes on those earning less than $400,000 a year to cover the costs.

Biden said he will host lawmakers in the Oval Office to exchange views on the plan. But the White House is also prepared to use a budget measure called reconciliation that would allow Democrats -- as long as they stay unified in the 50-50 Senate -- to pass a bill without any Republican support.

The president noted that no Republican supported his $1.9 trillion pandemic relief legislation, even after he reached out to a handful of GOP senators who expressed openness to negotiations. They didn’t “move an inch,” he said.

The president already faces some dissension among Senate Democrats. Progressives want the infrastructure plan to be bigger, while moderates such as Senator Joe Manchin of West Virginia oppose raising the corporate tax rate to 28% from 21%, as Biden has outlined. Manchin favors a corporate rate of 25%. Biden told reporters that he’s willing to negotiate the corporate rate.

GOP lawmakers have complained Democrats disregarded their views on the $1.9 trillion pandemic-relief bill that Biden signed last month. They said they want to avoid that outcome with the infrastructure package and that they want it to focus on traditional transportation projects.