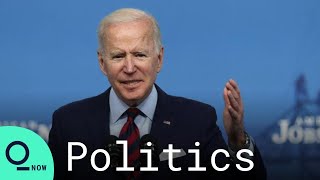 Biden Says 'Inaction Not an Option' on $2.25 Trillion Infrastructure Plan