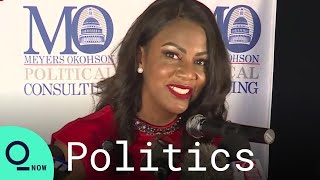 Bloomberg Quicktake: Now
St. Louis Treasurer Tishaura Jones, who has been outspoken in her criticism of the criminal justice system’s “arrest and incarcerate” model, won election Tuesday and will take over as the first Black female mayor in a city beset by yet another wave of violent crime.

Jones defeated Alderwoman Cara Spencer in the general election with 51.7% to Spencer’s 47.8%, based on unofficial results posted on the city’s website. She will be sworn in April 20.

Jones, 49, is a former state representative who has been treasurer since 2013.

She will replace incumbent Mayor Lyda Krewson, who announced in November that she would not seek a second term. Krewson, 67, is the city’s first woman mayor.

In her new job, Jones faces many challenges.

Businesses, including downtown restaurants and shops, are still struggling to recover from COVID-19 shutdowns.

But Jones and Spencer agreed that no crisis is as important as curbing violence, especially killings.

Police statistics show that 262 people were killed in St. Louis last year - five fewer than the record of 267 set in 1993.

But because the city’s population has declined sharply since 1993, the per capita homicide rate was much higher in 2020.

Already, 2021 is shaping up to be even worse. The city has recorded 46 killings through Tuesday, about 10 ahead of last year’s dangerously high pace.

Her victory speech focused largely on overcoming racism and bigotry.

"To the single mamas out there who are struggling to make ends meet. To the LGBT plus youth who are wondering if City Hall has you in mind. And for those of you who feel as if government has forgotten you and flat out left you behind, I will get up every day and work for you."