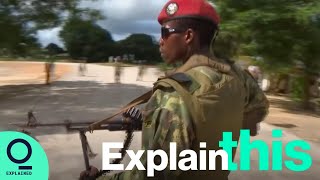 Bloomberg Quicktake: Now
A deadly insurgency in Mozambique has killed over 2,600 people since violence began in 2017 and threatens the biggest private investment in Africa.

Marc Davies explains how an ignored conflict unfolded in one of the world's poorest countries.

MORE: Total SA and Eni SpA plan to tap huge natural gas deposits that discovered off the northern coast of Mozambique a decade ago. Their projects and another being considered by Exxon Mobil Corp. could entail $60 billion in investment and have the potential to turn around the economy of one of the world’s poorest countries.

The developments have coincided with a series of increasingly brazen attacks by Islamist insurgents in the southern African country. While the main project sites have been spared from the violence so far, the security risks to the biggest investment splurge in Africa are ratcheting up as attacks get increasingly close.