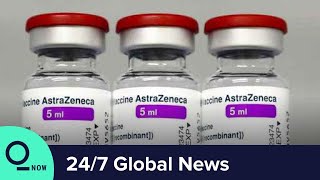 Bloomberg Quicktake: Now
(Apr. 7) The U.K. recommended not using AstraZeneca Plc’s Covid-19 vaccine on those under the age of 30 after drug regulators there and in the European Union highlighted a possible link with a rare type of blood clot in the brain.

The assessments follow an increasing number of reports of side effects in people who’ve received the Astra dose. Despite this, both the U.K. and EU agencies agreed that the benefits of the shot outweigh the risks.

In its latest recommendation, the European Medicines Agency said that “unusual blood clots with low blood platelets should be listed as very rare side effects.” The U.K. is advising that those under 30 be offered an alternative to Astra if one is available.

The latest assessments of the Astra vaccine, which was developed with the University of Oxford, come amid increasing public wariness about the shot, with patients from Bucharest to Calais canceling scheduled appointments as they await more clarity.

The warning could threaten the European Union’s vaccination campaign, which was just beginning to kick into a higher gear after a sluggish start. EU health ministers will meet this evening to discuss the path forward with Astra.

EMA Executive Director Emer Cooke tried to counter any public worries by pointing out that the vaccine is vital in fighting a virus that’s causing “thousands of deaths” every day. June Raine, chief executive of the U.K.’s Medicines and Healthcare products Regulatory Agency, stressed that the specific clotting side effects were very rare.

Concerns about the vaccine are centered on an unusual type of blood clot in the brain called cerebral venous sinus thrombosis. It has occurred together with low levels of blood platelets after vaccination.

“These clotting disorders are very rare side effects of the vaccine,” said Sabine Straus, the head of the EMA’s safety committee. The group hasn’t identified a “definite cause” or a patient profile that would be most at risk, according to Straus.

The EMA’s safety committee based its latest analysis on a review of 84 cases of clotting, with most to the brain area, that had been reported by March 22 -- at which point 25 million people in the U.K. and Europe had received the Astra shot.

By April 4, the reported clotting instances had increased to 222 -- again, with most to the brain area -- out of 34 million people who’d received the shot. Those updated figures do not change the agency’s recommendation, it said.

Generally speaking, these clots occur most commonly in women between the ages of 30 and 45, EMA officials have said, a group that in the EU has been disproportionately vaccinated with Astra’s shot.

Have a story to tell? Fill out this survey for a chance to have it featured on Bloomberg Quicktake: https://cor.us/surveys/27AF30​