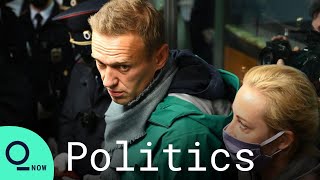 Navalny, who was moved to the prison infirmary with a respiratory infection Monday, is “in a fairly bad state,” Olga Mikhailova told Echo Moskvy radio on Tuesday.

The opposition leader, 44, reported a severe cough and a fever of 38.1 degrees Celsius (100.6 F), saying three other prisoners in his unit have been hospitalized with tuberculosis, according to a statement posted on his Instagram account Monday.

The chief opponent of Russian President Vladimir Putin started refusing food March 31 to pressure prison authorities to grant him medical treatment by a specialist for acute back pain that has spread to his legs. Officials say he’s getting adequate care within the prison and have again denied his request, Navalny’s allies said on his Twitter account.

The Federal Penitentiary Service didn’t respond to a request for comment Tuesday.

Navalny had already lost 13 kilograms (29 pounds) while in prison, his lawyer Mikhailova said on TV Rain Monday. Guards are waking him each hour because he’s officially been designated a flight risk, his supporters say.

The opposition leader has been held at the notorious IK-2 prison about 100 kilometers (60 miles) from Moscow since March 11. He was imprisoned for parole violations while recovering in Germany from a near-fatal nerve-agent poisoning in Siberia last year that he and Western governments have blamed on the Kremlin. Russian authorities deny involvement.

Navalny’s allies say close to 400,000 people have pledged anonymously to take part in protests calling for his release that they plan to call once the figure reaches 500,000.

His wife, Yulia Navalnaya, said his death inside prison will be on Putin’s conscience, in a statement on Instagram Tuesday